Lecture Four: The Calling of Abraham 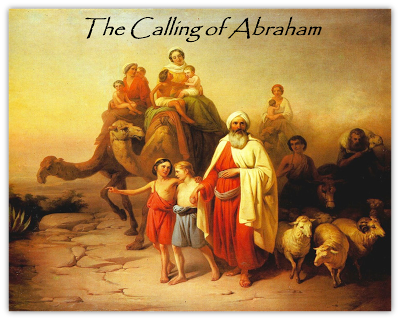 The Story of Terah
The text says that Terah had three sons named Abram, Nahor, and Haran.
Archaeologists have tried throughout the years to determine whether or not these people actually existed.
Archaeologists discovered a huge library of clay tablets at the ancient site of Mari, which is now located along the border of Iraq and Syria.
In this library, there were many ancient records listing several biblical names as actual cities or locations in the ancient world.
The Mari tablets mention the city of Nahor, which was the name of Abram’s brother.
Also, Terah, Peleg, and Serug are listed as cities in the ancient world. According to the Bible, Terah was the name of Abram’s father, Peleg was Abram’s great-great-great grandfather, and Serug was Abram’s great grandfather.
Terah moved his whole family away from the city of Ur of the Chaldeans by the Euphrates River and settled them in the city of Haran, 600 miles to the northwest in present-day southern Turkey.
Terah’s son Haran died before they left.
However, Haran’s son, Lot, went with them on their journey.
Terah originally planned to move his whole family to the land of Canaan, but then changed his mind when they arrived in a town named Haran.

The Call of Abraham (12:1-9)
God speaks to Abram, and tells him to leave his father’s household in Haran, and go to the land of Canaan.
Abram obeyed God and set out for the land of Canaan with his wife, Sarai, and his nephew, Lot.
God said to Abram:

“I will make you into a great nation,
and I will bless you;
I will make your name great,
and you will be a blessing.
I will bless those who bless you,
and whoever curses you I will curse;
and all peoples on earth
will be blessed through you.”

After they arrived in the land of Canaan, God appeared to Abram again and said to him, “To your offspring I will give this land.”

This was significant for several reasons.

Abram was homeless.
Abram and Sarai could not have children.
Abram and all of his family were polytheists. 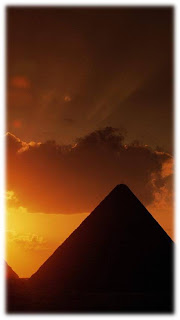 After Abram arrived in Canaan, there was a severe famine.

Abram moved his family down to Egypt.

Abram told his wife to pretend that she was his sister so that he would not get killed.

The Egyptians noticed how beautiful Sarai was, and they told the Pharaoh about her.

Pharaoh then took Sarai into his house to be one of his concubines.

Pharaoh reimbursed Abram for allowing him to own his “sister.”

Abram ended up getting rich off of Pharaoh because of this little scheme.

God didn’t like this and sent a plague on the Egyptians until they learned the truth.

Pharaoh sent Abram and Sarai away and the plague was removed.

Similar to the Exodus story. 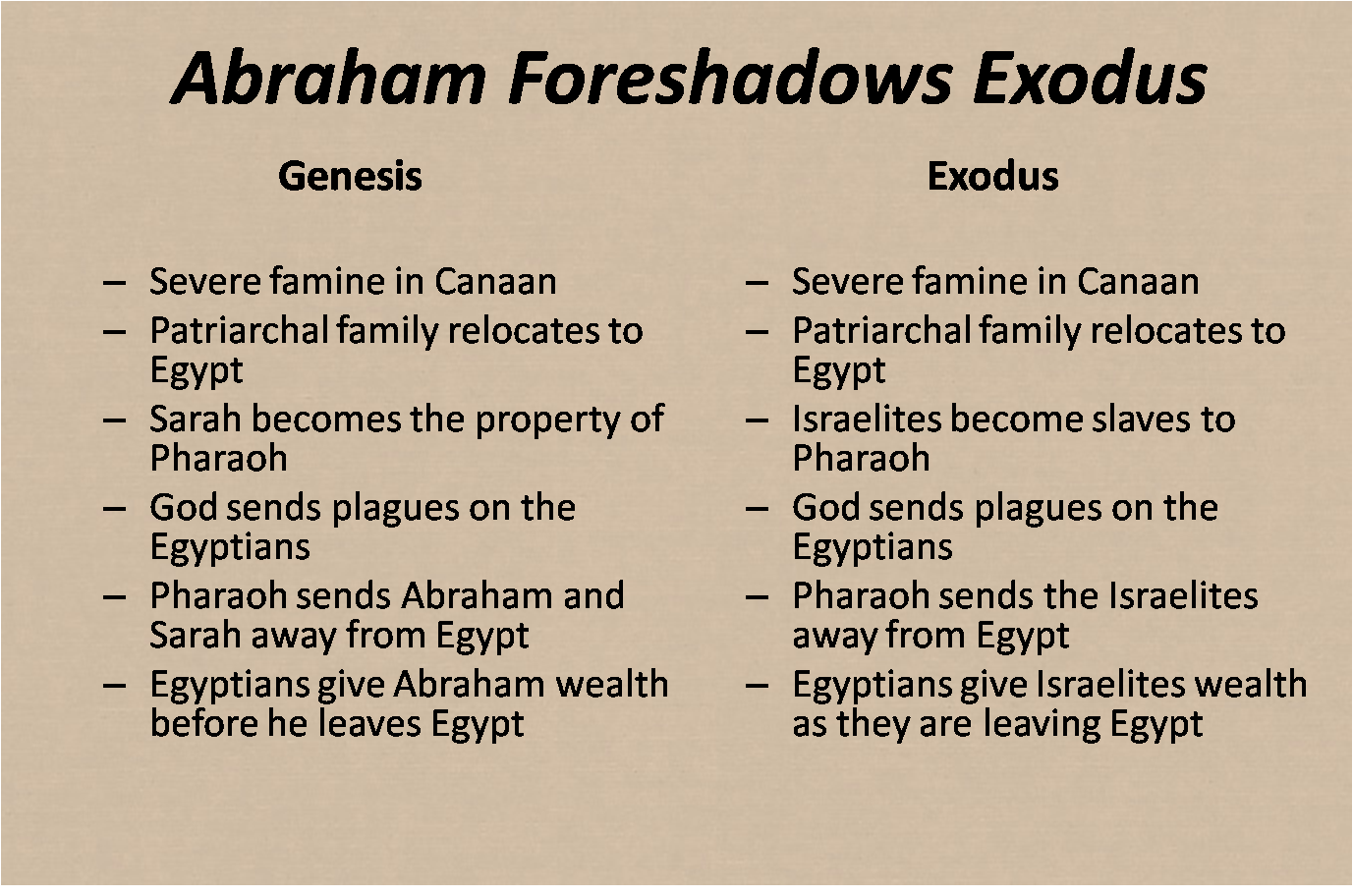 After the incident in Egypt, Abram took his family back north through the Negev wilderness and up to Bethel.

Abram and Lot met together and agreed that they would move their flocks and herds away from each other in opposite directions.

Abram moved in the opposite direction, to a place called Hebron.

Several eastern kings joined forces and conquered the five great cities of the Jordan Valley, including the cities of Sodom and Gomorrah.

Later, these five cities started a revolution that was quickly squelched after a great battle near the Dead Sea.

Many people were carried off to the north, including Abram’s nephew, Lot.

When Abram heard about this, he gathered up the Amorites who were allied with him at The Great Trees of Mamre and set out in pursuit of the invaders.

Abram’s surprise campaign was successful, and they brought back all of the captives and their belongings, including Lot and his family. 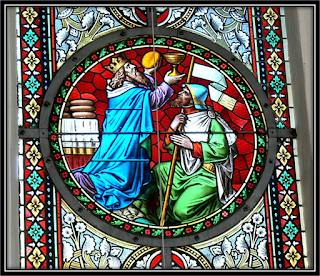 After the victory, all of the kings came out to greet each other.

King Melchizedek of Salem (later Jerusalem) came out to greet Abram and gave him a blessing.

Abram then gave a tenth of his possessions to Melchizedek.

The King of Sodom then tried to give all kinds of riches to Abram in gratitude, but Abram refused to accept them, saying that he did not want anyone to ever say that “Sodom made Abram rich.” 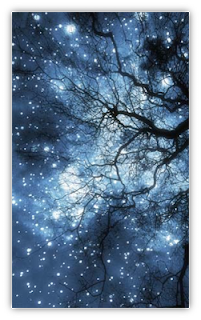 “He took him outside and said, ‘Look up at the sky and count the stars—if indeed you can count them.’ Then he said to him, ‘So shall your offspring be.’”

God also promised to give Abram a land to live in.

Abram wants proof, so God proposes a covenant between Himself and Abram.

Abram goes to prepare the ritual ceremony for the covenant between them by cutting several sacrificial animals in half.

This was a very common practice in the desert communities of the Middle East, especially in marriage covenants, and is also where we get the term "cutting a covenant" or "cutting a deal." 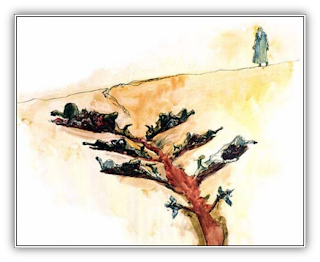 When two parties came together make a covenant, they would kill animals and let the blood pool between the pieces. Abraham does this and then waits for God to act.

The pool of blood is known as a blood-path.

The two parties must both walk through the blood path to symbolize the solemn agreement they have made.

The greater party goes first, saying, “May what was done to these animals be done to me if I do not keep this covenant.”

God walks through the blood first.

The text reads that smoke appeared and passed between the animal pieces.

This smoke is understood to represent the presence of God. 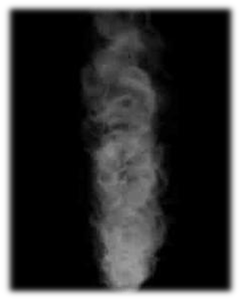 Examples of other places where God is represented by smoke in the Bible:

God’s end of the deal: “I will give you land and descendants, one of whom will be the Messiah.”

Abram’s end of the deal: “You and your descendants must walk before me and be perfect.”

Abram and his descendants were in no way perfect.

It’s Abram’s turn to walk through the blood, but in so doing he would be condemning himself and his descendants to death.

God stops Abram and walks through a second time in Abram's place in the form of fire, implying, “If either one of us break this covenant, then I’ll die for both of us.” 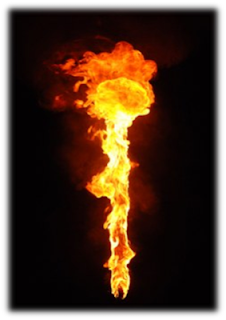 God sentences Himself to die in the place of Abram and his descendants if they ever sin... which you already know is exactly what happens later if you're familiar with the Jesus story at all.

Some examples of God represented by fire in the Bible:

Later, Abram and Sarai decided that they would take matters into their own hands.

Sarai was getting older, and she did not believe that she would ever be able to have children.

So she told Abram to get her servant Hagar pregnant.

After this, Hagar and Sarai began to hate each other.

The angel of the LORD appears to her and tells her to go back to Sarai, and that God would take of her and her son.

God also told Hagar to name her son “Ishmael” and said that when he grew up he would be “a wild donkey of a man,” or, as less polite interpreters translate, "a jackass."

Hagar called God “El Roi,” which means “The God Who Sees,” because He had seen her in her misery and had looked out for her.

Hagar returned and had her son.

When Abram was 99 years old, God appeared to him again and reaffirmed the covenant they had made together ten years ago.

God commanded Abram to walk before him and be perfect.

God then changed Abram’s name to Abraham and Sarai’s name to Sarah, and said that they would be the parents of many nations and kings.

God gives them new identities - He makes new people out of them.

Abram (now Abraham) laughed at God and told Him to just bless Ishmael because Sarai (now Sarah) was too old.

“I will make Ishmael into a great nation as well, but I will still give Sarah a son.”

“You will name him ‘Isaac,’ because you laughed at my promise.”

God, however, got the last laugh here when he commanded Abraham to go circumcise himself as well as all the men and boys in his care, so that every time they looked at what they had done to themselves, they would remember God’s promise.

Posted by Daniel Sheets at 3:12 PM

Daniel Sheets
Daniel Sheets has worked as an Adjunct Professor at Olivet Nazarene University, teaching Old Testament in the School of Theology and Christian Ministry, and as Pastor of Research and Application at Point of Change Church of the Nazarene in Bloomington, Illinois. He has been married to his beautiful wife Angela for seven years, and has a daughter named Anita. His B.A. is in English and Intercultural Studies, and he has an M.A. in Christian Ministry. He enjoys writing, drawing, and pursuing educational interests on Biblical studies in his spare time. He also loves the works of JRR Tolkien. He has lived in Idaho, Montana, California, Alaska, Nebraska, and Illinois. He has also spent a lot of time traveling around the United States and Canada, and has visited Argentina, Brazil, Paraguay, and the Dominican Republic. Daniel is also a member of the Pokagon Band of the Potawatomi Nation.